Getting a Licensing Board Investigation Terminated

Turning California Licensing Board Disciplinary Action into a Citation 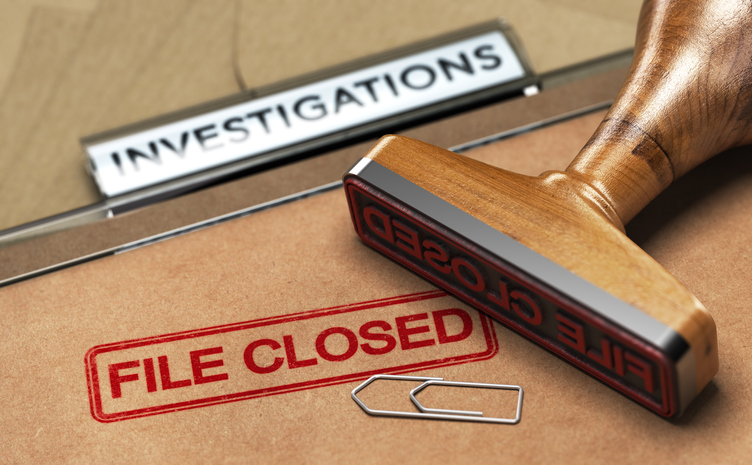 When your California licensing board launches an investigation and you receive a letter from them indicating that an investigation is being conducted about you, your first impulse may be to start communicating with and vigorously defending yourself with your investigators. You may reasonably assume that if you just explain your actions, the investigators will drop the case, realizing that your one mistake was unintentional and an anomaly, right?

No. That action, communicating with Board investigators can actually be the worst mistake you can make and may jeopardize your chance of getting your investigation potentially terminated.

In our practice, we have worked with several clients who have had their investigations terminated and disciplinary action avoided with their case resulting only in a citation.

A California therapist, Susan, driving from a dinner with friends was stopped by a police officer who administered a breathalyzer test and determined she was under the influence of alcohol and above the legal limit. She was immediately arrested and charged with a Driving Under the Influence (DUI). The California Board of Behavioral Sciences which governs LCSW (Licensed Clinical Social Workers, Licensed Marriage and Family Therapists (LMFT), LPCC (Licensed Professional Clinical Counselors), and LEP (Licensed Educational Psychologists) was automatically notified once these criminal charges were filed and Susan received a letter indicating that the Board had launched an investigation. Susan was beside herself. She had never been arrested before or even had a traffic ticket let alone an investigation by her professional licensing board and she had a well-established and successful professional practice.

Fortunately, before communicating with investigators, Susan contacted our offices at Lucy McAllister Licensing Law. We were able to successfully build an evidence-based case which demonstrated successfully to the board that there was insufficient evidence that Susan should be disciplined by the board by having her license suspended or revoked and she received only a citation as a result. 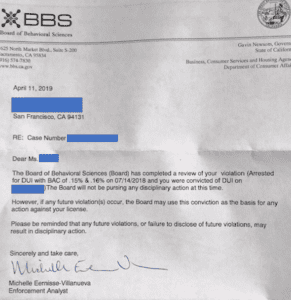 “I received a letter from the Board of Behavioral Sciences Examiner yesterday, in which the Board agreed to no further action to be taken on my professional license.  This is because of the diligent, thorough work and guidance by Lucy McAllister, my attorney.  I owe her a debt of gratitude. I entered into my case with so much shame and regret.  I was so demoralized. So down on myself and embarrassed. Lucy held the hope and consistently told me, “Susan, don’t worry, this mistake will not define you”.  So, far in the end it has not. It was as Lucy said a block in the road of life and now my professional career and life continues.”

Importantly, citations are administrative actions and are not considered disciplinary actions and as such, do not need to be disclosed to employers or other professional organizations. They are also not a matter of public record and are not published on board websites (unlike disciplinary actions). They are purged completely from board files after a board-specified period of time (2-3 years typically).

If you have received an Accusation or a letter of Investigation indicating your license is at risk, it is extremely important to contact an experienced license lawyer BEFORE responding or communicating in any way with investigators. And if you have been charged with a criminal offense such as insurance fraud, substance abuse, a DUI or domestic violence, it is even more important to hire an attorney with criminal law experience as well as licensing law experience so that your criminal case and licensing case is handled by the same legal strategist who understands how one case impacts the outcome of the other.

The Law Offices of Lucy McAllister has helped hundreds of California professionals defend their licenses to practice and we have both the criminal law and licensing law expertise to work with you to evaluate your legal options and develop the strongest possible case with your licensing board so that we maximize your chances of receiving a citation or the least severe disciplinary action.

For additional information or to schedule a consultation to discuss your licensing case, please call us toll-free at 877-280-9944.

OPEN FOR BUSINESS DURING THE COVID-19 PANDEMIC

Contact us at lucy@lucymcallisterlicensinglaw.com or call us toll free 877-280-9944.