We have successfully represented many clients being investigated by various California departments, licensing boards and licensing bureaus with outcomes including withdrawls of accusations, reinstatement of license, no finding of disciplinary actions and letters of public reprovals being issued by licensing boards.

A California licensed vocational nurse (LVN) was accused of failing to administer appropriate medication to a patient. The CA Board of Vocational Nursing and Psychiatric Technicians launched an investigation into the LVN’s license under California Business and Professions Code Section 2878(a). After evidence was presented by the Law Offices of Lucy S. McAllister (and with extensive communication with investigators), while the allegations were confirmed, the board’s investigation was concluded with no disciplinary action taken against the LVN.

A newly-licensed California Registered Nurse was convicted of a DUI. The RN hired Ms. McAllister to represent the RN in criminal court for the DUI and then  to prepare all of the disclosure information regarding the DUI to the BRN.  Ms. McAllister  negotiated a minimal punishment in the criminal DUI action and then carefully prepared the RN’s disclosure statement  regarding the RN’s minimal punishment and the details of the alcohol consumption. Ms McAllister’s strategy was so successful that the RN was NOT placed on probation and the RN  was issued only a minimal citation.  This citation was NOT placed on the RN’s public record. The RN did not lose his job and has no marks on his public RN License. This result was a huge success for the RN. Read the Citation

A real estate license applicant needed to disclose 3 criminal convictions on his application for licensure. The licensee hired Ms. McAllister to disclose the 3 convictions and prepare a statement surrounding the circumstances of his convictions. The California Bureau of Real Estate granted the client a Salesperson License with no restrictions.

An ACSW license applicant needed to disclose 8 criminal convictions on his application for licensure. The licensee hired Ms. McAllister to disclose the 8 convictions and prepare a statement surrounding the circumstances of each conviction. The Board of Behavioral Sciences granted the client an ACSW license with no restrictions. 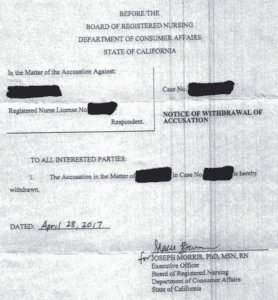 A California Registered Nurse received an Accusation alleging unprofessional conduct for gross negligence due to a medication error. The RN retained Ms. McAllister to defend the Accusation. Prior to hearing, Ms. McAllister was able to demonstrate to the Attorney General and the BRN that the RN, in fact, followed policies and procedures of the employer and the medication error was as result of a 3rd party individual.  Therefore, the allegations were unsubstantiated. A Notice of Withdrawal of Accusation was issued. 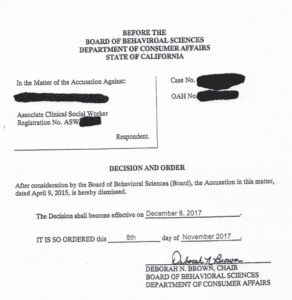 An Associate Clinical Social Worker received an Accusation alleging gross negligence and/or incompetence (specifically citing 5 alleged failures), failure to keep records, and unprofessional conduct.  Prior to the hearing, the Board of Behavioral Sciences offered a Stipulated Settlement and offered the client 3 years probation. The client rejected the settlement  After an Administrative hearing  (which lasted 4 full days), the Administrative Law Judge’s proposed decision suggested a 1 year probation term for the client. Ultimately, the Board of Behavioral Sciences rejected the Administrative Law Judge’s decision, and dismissed the Accusation. 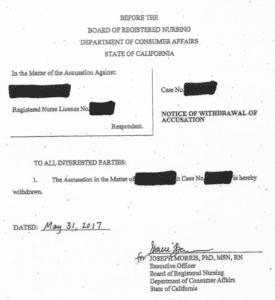 A California Registered Nurse attended an interview, without counsel, with a Special Investigator with the Board of Registered Nursing. Subsequently, the RN received an Accusation. The RN retained Ms. McAllister to defend the Accusation. Prior to hearing, Ms. McAllister successfully argued to the Attorney General and the BRN that the RN’s conduct did not fall below the standard of care and the causes of discipline (incompetence and unprofessional conduct) were unfounded. A Notice of Withdrawal of Accusation was issued. 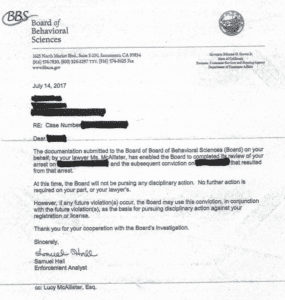 An Associate Clinical Social Worker was convicted of a DUI. The ACSW hired Ms. McAllister to disclose the conviction to the BRN. Subsequently, the ACSW received a letter from the Board of Behavioral Science stating: “At this time, the Board will not be pursing any disciplinary action. No further action is required on your part, or your lawyer’s”.

A California Registered Nurse was convicted of a DUI. The RN hired Ms. McAllister to disclose the conviction to the BRN. The RN successfully renewed her license without being subject to disciplinary action.

An Applicant for a CPA License retained Ms. McAllister to disclose his past criminal conviction to the CBA. The applicant successfully obtained his license without any restrictions.

A California Registered Nurse was convicted of 2 DUI’s and was issued an Accusation. The RN hired Ms. McAllister to defend this Accusation. The BRN was unwilling to settle the case pursued revocation of the RN’s license. After full hearing, the Administrative Law Judge ordered that the RN may keep her license, subject to a three year probation period. The BRN adopted the Administrative Law Judge’s decision.

A California Licensed Psychologist received a letter of investigation with respect to an audit of continuing education. The Board issued a citation against the psychologist (the lowest form of disciplinary action).

A California Registered Nurse received an Accusation for gross negligence with respect to a medication error. Ms. McAllister presented mitigation and rehabilitation evidence to the BRN prior to hearing. The BRN agreed to issue a letter of public reproval and the RN was not subject to probation or revocation of licensure.

The BRN received a complaint against a California Registered Nurse. The BRN conducted an investigation against the RN, alleging unprofessional conduct, gross negligence and/or incompetence for not establishing and maintaining professional boundaries with a patient. Prior to an interview with the investigator, Ms. McAllister thoroughly prepared the RN. Ms. McAllister attended the interview with the RN. Subsequently, the BRN closed the complaint against the RN.

If you need a consulation about your own specific circumstances, legal options and more information about our law practice, please call Lucy S. McAllister at (877) 280-9944.